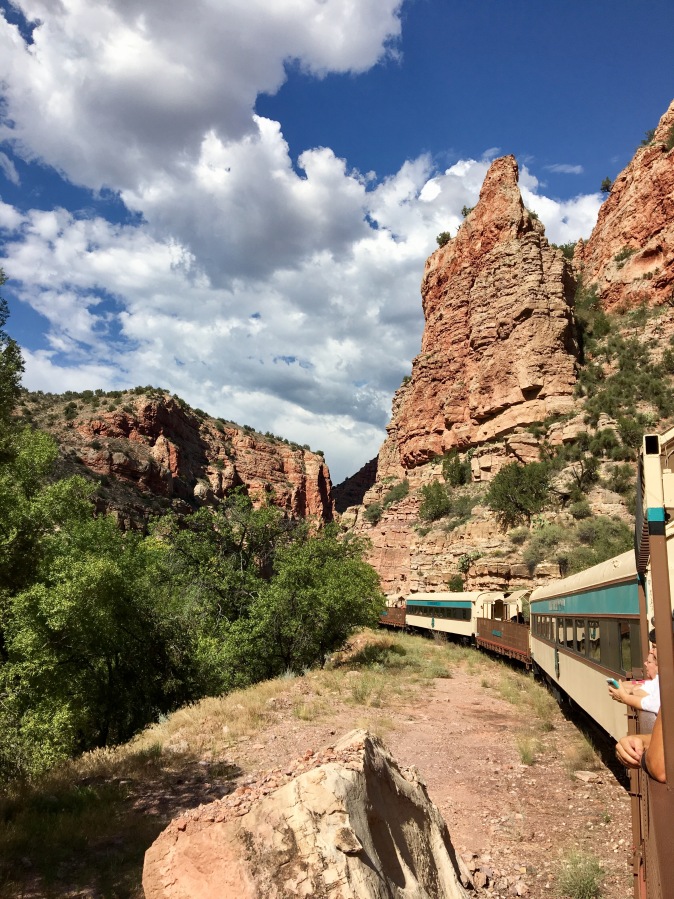 Clarksville, in The Monkees’ first single,  ‘The Last Train to Clarksville’,   is actually referring to Clarksdale Arizona.  Songwriter Bobby Hart commented that they were looking for a good name to use and he recalled a little town in Northern Arizona that he used to pass through in the summer on his way to Oak Creek Canyon and it was called, Clarkdale. 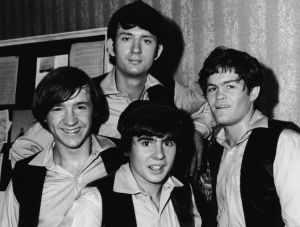 The Monkees’ Micky Dolenz sang the lead for this #1 Billboard  hit.  The song was intended to be a quiet protest of the Vietnam War and was released August 16, 1966. 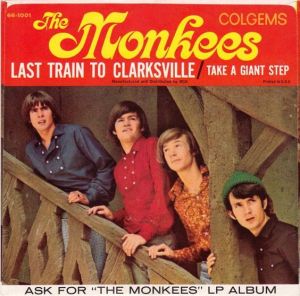 Some of the lyrics:

The town of Clarksdale does indeed have a train that runs through it. The
track was originally laid in 1912 linking the copper smelters in Clarksdale to the copper mines in Jerome Arizona as part of the Santa Fe Railway. 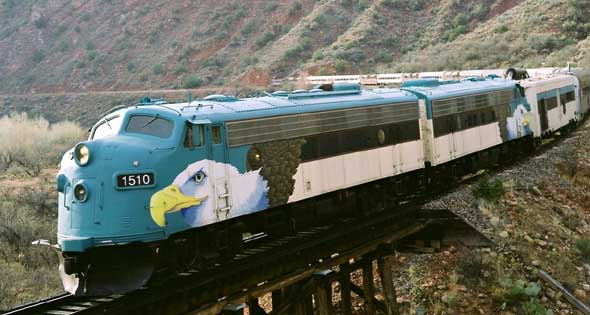 In 1988 a 20 mile section between Clarksdale, milepost 38, and Perkinsville, milepost 18, was purchased by David Durbano. Two years later it opened as The Verde Canyon Railway with passenger service that runs along the Verde River and through this  beautiful canyon which divides the Coconino National Forest and the Prescott National Forest. 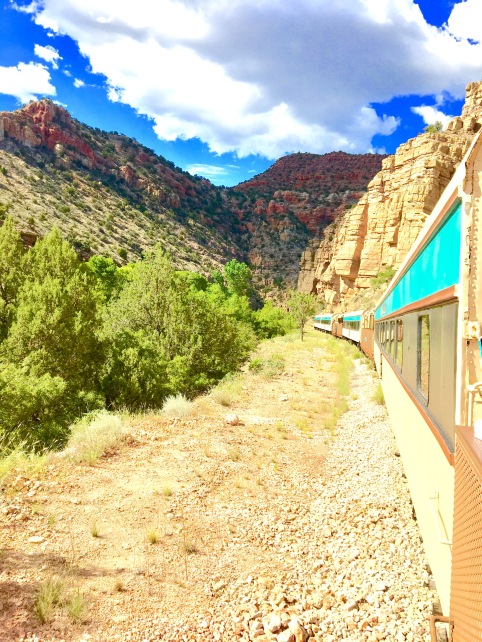 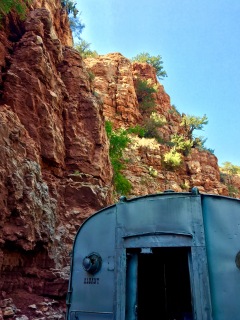 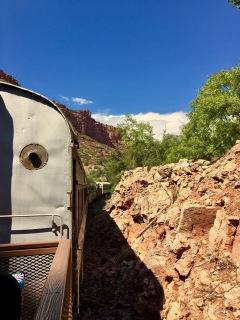 The Verde Canyon is only accessible via this train or by foot.  It is about 25 miles southwest of Sedona.  From the train depot and museum in Clarksdale it is a four hour round trip train ride through the Red Rock Canyons in fully restored vintage locomotives with both dining and open air cars. 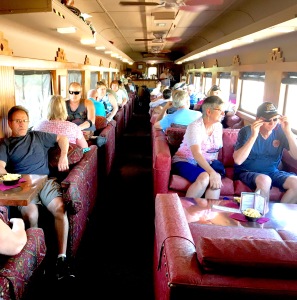 We chose to travel on the first class coach which provided us with a very knowledgeable docent to describe the sights as well as a champaign toast and a catered spread on the bar at the end of the car.  We also had access to a private open air car where the views were amazing. It felt like a trip back in time to a more civilized time of transportation. 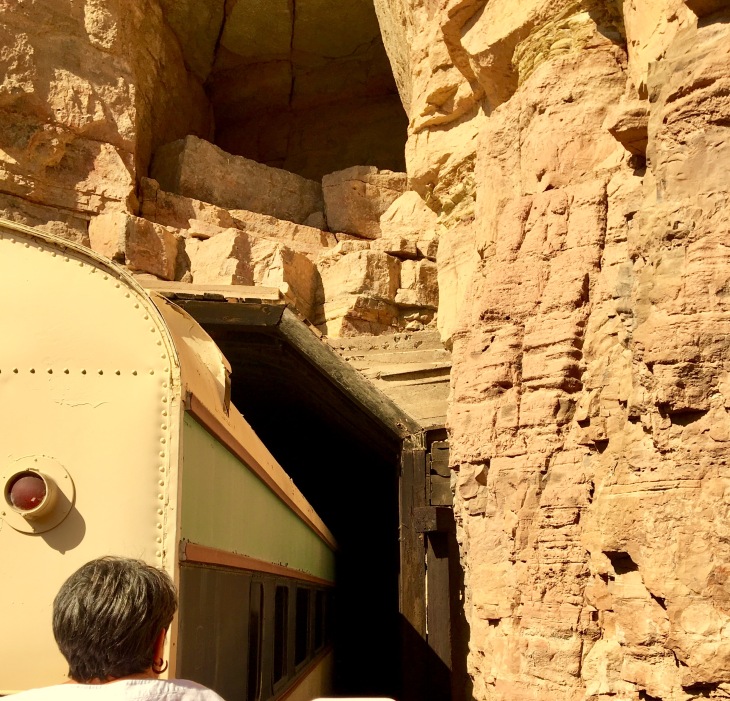 The train went through a 680 foot man made tunnel blasted out of solid rock. It was pitch black and the train echoed as we barreled through in the open air coach. One hundred year old trestles and bridges also span some of the side gorges off of the Verde River.  It was an impressive amount of technology and engineering that was required for that time. 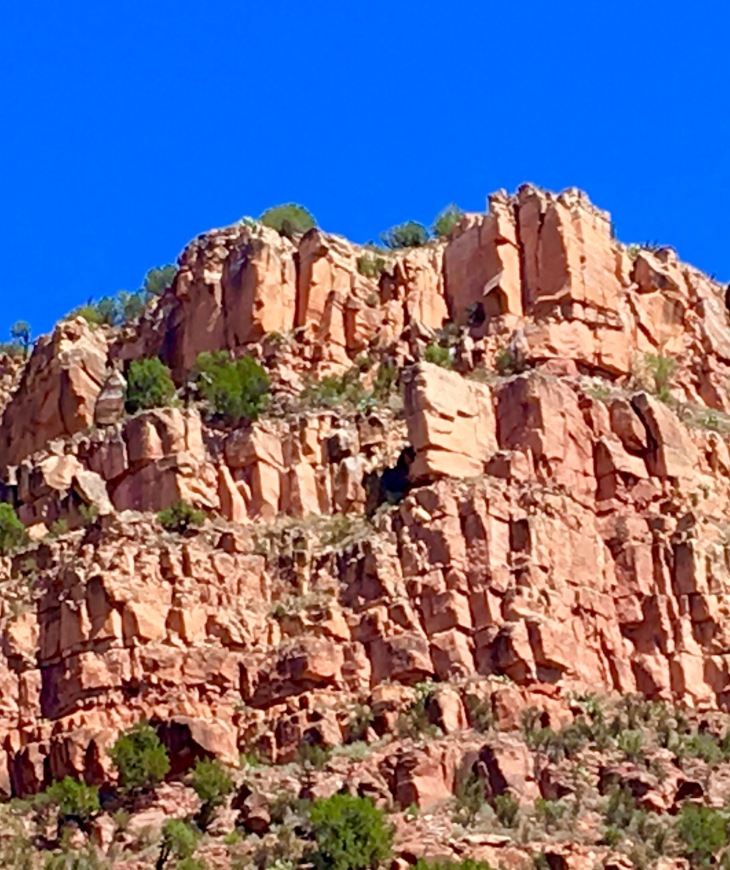 The towering Red Rock Buttes had been home to native americans for many years before we arrived and they hold their history.  There is evidence of many caves and dwellings from the Hohokam and Sinagua Indian peoples.

In the center of this particular rock formation is a large cave that still contains remnants of white pictographs and of black soot covered ceilings from fires the Sinagua Indian Cliff Dwellings most likely used for cooking and heat.  It is thought that the light from these caves probably looked like giant glowing eyeballs at night.  The Sinaguan Indians abandoned the Verde Valley in the early 1400s long before the Spanish arrived and nobody really knows why.

There were several other groups of American Indians that were present when the Spanish explorers arrived in search of gold and silver. 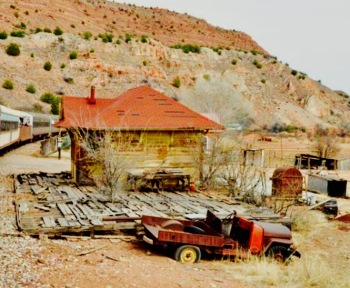 The town of Perkinsville is the last stop on the Verde Canyon tour.  It was established in 1900 by AM Perkins as a cattle ranch.  In 1912 the above train stop and depot was added between Clarksdale and Jerome to support copper mining operations. At one point the community supported 10-12 families and even had a small school, general store and its own post office.

It became a ghost town when the Phelps Dodge Copper Mine was closed in 1953.  In the 1960s the location was used in the filming some of the scenes from How the West Was Won.

A nice couple we met on the train told us that we needed to visit an old Hippie town called Jerome.  They said it was a very cool place with amazing views and totally worth the stop.

This is Jerome which is situated at an elevation of about a mile at 5066′.  Perched on the top of Cleopatra Hill, Jerome  was at one time Arizona’s largest copper mining town and located at the other end of this section of rail.  It was founded in 1876 and know as the ‘wickedest town in the West’. 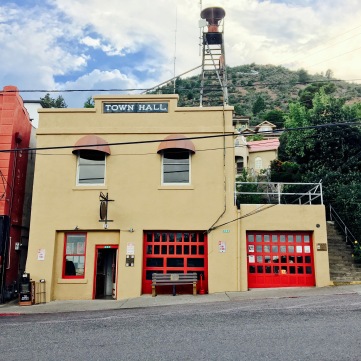 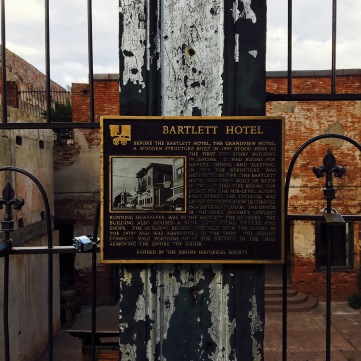 Today it is a beautiful tourist destination with quaint shops, restaurants and inns.  The views are amazing and vistas are everywhere you look. 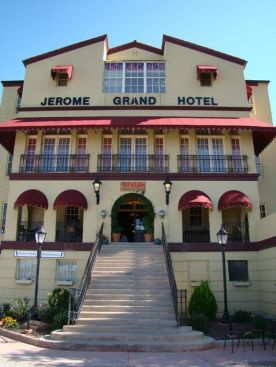 Above is the National Historic Landmark and Haunted Jerome Grand Hotel.  It opened in January of 1927 as the United Verde Hospital and closed soon after the mining operations ended in the mid 1950s.  There was an unusual death of a custodian in an elevator and people have reported hearing labored breathing and coughing, a sharp drop in temperature or doors opening and closing by themselves.  There have also been reports of the appearance of a women in white on what would have been the hospital balcony and of course the poor custodian walking through the building.

It was purchased by the Altherr Family from the Phelps Mining Corporation in 1994 after having been left undisturbed for 44 years.  It is a carefully preserved time capsule and very interesting.

The views from Jerome are truly magical!

If you would like more info about the Verde Canyon Train Tour or visiting Jerome you can check out: